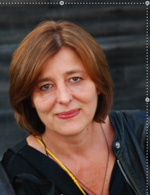 Art critic born in 1959 in Romania, she collaborated with several magazines including Elle and Artension and taught history of architecture at FEMIS.

The artist has been going to the beaches of the Adriatic coast, which extend over a hundred kilometres between Venice and Trieste, for a long time. Children whine, women comfort them, husbands read sports newspapers, girls parade around in their bikinis, and boys watch them.

There is life there: social, encoded, ritual, foreseen. “The Italian soul is much more complex than we might think”, says the artist.

The photograph entitled “Les Héros” (The Heros) was taken during this summer atmosphere. Thousands of people, in their swim suits, gathered together all along the sea front, looking in the photographer’s direction. People thought they were attending the landing of a flying saucer. People believed for a long time that the photograph had been staged and reconstructed, but this was not the case, reality is such that sometimes it is stranger than fiction.

The picture has been around the world. In fact, the appearance of a flight squadron that cannot be seen in the picture starts itsshow full of noise and smoke, just above the beach.

“Le matin du monde” (The morning of the world) is another great photograph from the artist’s Venetian production. On Biblione’s beach, very early in the morning, the image seems timeless, like an archeological site with columns as far as the eye can see, a totemic landscape. In a few hours, life will begin again. Yet still silent and deserted, the place seems sacred. It is five o’clock in the morning, the photographer presses the button.

It is the key moment that makes a great picture, said Cartier Bresson. Just like the Marquis of Bivière who planted six yew trees in his garden so he could bring his love conquests there and say to them: this is the place of the six yews.

There is something conclusive in the creation of a successful photograph. The coincidence between time and space, the time and place of the click, the abduction. The predator side of the armed photographer, his contemplative spirit, his soul in love. In the 80’s when he photographed the streets of Paris, he looks at the people and the streets in a tender way. He photographs only the 18th and 19th districts…His map of tenderness.

Kiki of Paris is himself a tender, soft-hearted person. The French actor Michel Simon already called him by his nickname in the 60’s; he introduced him to Henry Miller who would welcome him a few months later to California. Immediately after landing at Los Angeles airport, he called Miller who no longer remembered who he was, but the artist insisted: it’s Kiki of Paris! Miller laughed and the nickname stuck.

He wanted to paint, but he became a photographer on Henry Miller’s advice.

His melancholy places him amongst poets

The yellow taxi that can be seen in the picture that he called Key West had just dropped him off on the edge of the long road that passes through Miami. The strangeness of this image is intriguing. You can take what you want from it, but the meaning leans towards sadness, oppressive silence, the solitude that is sought, on that day, when the taxi disappeared into the humid heat, he felt
abandoned, alone in the world.

Basically, it is intangible things that the artist photographs. In the piece of work called “Le dernier tour”, (The last lap) the merry-go- round’s wheel goes round for the last time of the day. Passengers are trusting, a thin and handsome man, like a toy soldier, operates the machine. He looks like the last Mohican, the photographer questions himself about the passing of time. If this photograph is part of the contemporary aesthetic that exploits the kitsch and popular culture, its romantic side makes it content greater.

The production of Kiki of Paris’ works is relatively limited. He destroys several of his own images. He manages to lose them.

He also manages to reconstruct images, like in his series called “Structures Polymorphes” (Polymorphic structures). He aims for a thoughtful, intended meaning, he creates a tailored image, an allegory: “Ulysses, Adios Queens, Le sacrifice du coq, Le Messager” (Ulysses, Adios Queens, The sacrifice of the cock, the Messenger)… Desolation Canyon assembles a group of three people that the artist photographed at Charleroi, and has “moved” to the famous American landscape of the Valley of Death creating an exceptional work of art through its evocative power.

« The immense distress and desolation of these people is disturbing. Only the face of the young boy is rebellious. “He was not happy to be photographed”, recalls the artist, “his look resembled that of those who clearly know that they cannot escape. We are not all equal, this can be seen every time” he said, although he remained optimistic in adding “Miller was always a man of good spirits who repeated to anyone who would listen that life is a blessing , whatever the circumstances … »

Kiki of Paris’ photographs bear witness to an assertive subjectivity, his vision of the world, his love for ordinary people, folk festivals and the playacting of the streets…

“Loulou, un chien français” (Loulou, a French dog) who crosses the pedestrian crossing only to please his mistress, a war widow; the spontaneous smile of a young girl in “Les majorettes de Prague” (The cheerleaders of Prague).

Far from any attempt at seduction, his camera captures the intimacy created between people and things. The situations that he chooses make us think and are moving, and so for that, we should thank him.